The volunteers of AF Mysore carried out their 8th Sunday Breakfast Serving at the ‘Smt. Puttaveeramma Deaf School’, Vidyaranyapuram. Mysore. Located halfway between the NIE College and the Sterling theatre, this school is home to the 30 odd deaf and mute girls. This outing of the volunteers was by far the most challenging one so far as it demanded them to understand and socialize with girls who could neither talk nor hear.
This institution started operations in 1989 with an intention to provide shelter to a couple of deaf and dumb girls. Over 21 years this institution has been sustained almost entirely by Smt. Puttaveeramma and her daughter Sharadamma. Today the institution stands strong with two separate buildings. One used exclusively for lodging and the other as the teaching facility. The teaching facility has over 10 dedicated teachers. The school has students coming over from all parts of the city and surrounding towns and villages. There are also many girls who stay back at the institution and it is for them that the residential facility provided. Another charitable institution lends the service of a van that will ferry the students from the house to the school and back every day.
Things were not always this rosy for the underprivileged girls, recalls the 91 year old Smt. Puttaveeramma. She informed that the initial years were the most testing. One job was not enough to feed her and the girls. She confided that working at a nearby silk factory wasn’t enough and had to resort to begging for a couple of hours to make the ends meet. When asked what gave her the strength to carry on, she said, “As such these girls are unable express their grief. I couldn’t stand seeing them go hungry too. So I did what I had to do to see things through”. These words of commitment by the nonagenarian made many a hearts of the volunteers heavy.
One understood that the recognition that the institution and it's driving force truly deserved eluded them for a while. 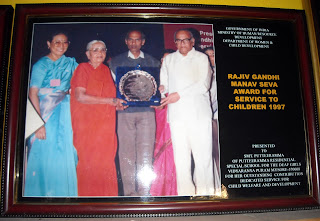 In 1997, Smt. Puttaveeramma was conferred with the prestigious ‘Rajiv Gandhi Manav Seva Award’ for her outstanding contribution and dedicated service for child welfare and development. This meritorious award is constituted by the MHRD, Government of India.  She has also been the recipient of the ‘Karnataka Rajya Prashasti’ for the year 1998 – recognition to her service in the field of education. She was felicitated by the then Chief Minister of Karnataka, Mr. J. H. Patel. 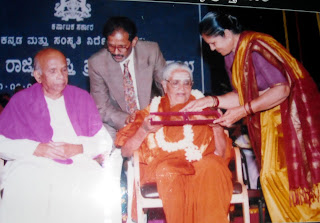 The volunteers reached the venue by 8.30AM. The silence of the first few minutes was tough to adjust. To socialize with one another without talking was quite an experience to the volunteers. It was learnt that the girls come over not only from Mysore but also from the surrounding areas like Srirangapatna, Nanjangud, Mandya etc. Many of them come over in the month of July, join the school and pursue one year of academics and go back to their homes in the month of March. 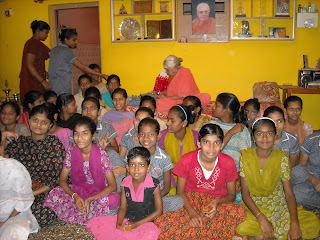 “When they come over for the first time, they feel a little uneasy to adjust to the environment, but things change in a matter of few days. They begin to like it here better than home as they are in the company of others like them. They get used to do things themselves and interacting with each other which actually instills confidence to lead their lives”, said a proud Sharadamma. She told the volunteers that her mother was her biggest role model and that she will try to be as selfless as her mother in helping the needy.

The volunteers also learnt that Smt. Puttaveeramma and her daughter Shardamma were not interested in publicity rather preferred concentrating on their work. The volunteers handed over the breakfast to be served later. They also distributed 'yummy' chocolates to all the girls. The AF-Mysore team wishes to thank one of its own members (name undisclosed on request) for sponsoring the breakfast for the day. The volunteers of AF-Mysore did learn one invaluable lesson – The impairment of either speech or hearing does not impair the reception and reciprocation of goodwill, hope and joy. They bid farewell with distributing chocolates to the girls. They all left the place with warmth in their hearts and a smile on the lips. After all, as a certain Chinese proverb puts it, “A bit of fragrance always clings to the hand that gives the roses”.