Makkala Mane (Children’s home) is one of the unique rehabilitation places that cater to the need of the children’s of prisoners. When the bread-winner of the family is serving prison, education of their children becomes a casualty. When both the parents go to jail or when the mother goes to jail, they are usually allowed to take children below 7 years along with them. FORHD also takes up the responsibility to counsel the prisoners regarding value of education or undesirable nature of keeping children in prison along with them. Such children are housed in the Makkala Mane run by FORHD at Mysore.
The event started at 8.30 AM with breakfast serving to the 23 children at Makkala Mane. The children prayed to the almighty in unison before the breakfast.

The volunteers served idli-vada and badam milk to the children. After the breakfast serving few of the volunteers caught up with Ms. Mayamma, one of the care takers of the place. She enlightened the plight of the kids to the volunteers.
“Kids of prisoners usually have no place to go. As such their parents would be in jail and they are looked down upon by their relatives and the society. Such conditions often force children to take up wrong means to earn two square meals a day”, she said. She further added that, “It is in such conditions that a vision like FOHRD and efforts like Makkala Mane would serve the society better. We take up the responsibility of shelter, food and education of these children.”
It was learnt that all the children were admitted to either one of the nearby schools. Education was a high priority here with efforts being made to get a private tutor to come and teach the kids every day. 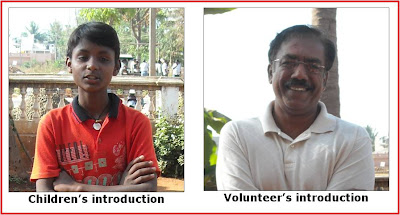 Meanwhile the children assembled in the porch to have some fun on the lazy Sunday morning.
The children first introduced themselves followed by the volunteers. It was learnt that the residents were constituted not only from the nearby areas but also from far away cities.


Few of them also had their relatives but chose to come and stay here with other kids in the hope of better education and other facilities.
Few of the children also expressed how much they would miss their parents. Later, the volunteers organized some fun games for the children. Few of them also volunteered to sing. The kids also performed a group dance.

The volunteers then wished the management of FORHD for their good work and bid adieu to the children with a promise to come back soon.
More children to be met… More smiles to be spread… And more hopes to be nurtured…
The Aashayein caravan shall go on. See you next week with more updates.
Useful Links
Event Pics | Join Aashayein-Mysore | About Aashayein

Posted by Aashayein-Mysore at 7:26 AM